The hormonal agents that can be used for treating dub include

Oral contraceptives (OCs), commonly known collectively as „the Pill,“ contain combinations of an estrogen and a progestin (either a natural progesterone or the synthetic form called progestogen).

These agents block production of male hormones and inhibit receptors for estrogen in the uterus.

They also protect against ovarian and endometrial cancers .

It is not clear, however, if they are any more effective than NSAIDs in reducing heaving bleeding, but they may still be a good option for women seeking both birth control and relief from menorrhagia.

Combination pills are sold in 21-day or 28-day packs:

OCs may be taken in cycles that include pills of the same or different strengths.

These are categorized as monophasic (one-phase), biphasic (two-phase), or triphasic (three-phase).

The difference in duration of each phase depends on the brand.

In all cases, women continue to menstruate, but their periods are lighter, shorter, more regular, and less painful than bleeding in women who are not on the pill.

The monophasic regimen is the most studied regimen and at this time is preferred.

Estrogen and progestin each cause different side effects

Uncommon but more dangerous complications of OCs include high blood pressure and deep-vein blood clots (thrombosis), which may contribute to heart attacks or strokes.

It should be noted that a long-term study of 46,000 British women found no difference in mortality rates between women who took OCs and those who did not.

The most serious side effects are due to the estrogen in the combined pill. Women at risk can usually take progestin-only contraceptives.

Other Forms of Combination Contraceptives.

Other methods for delivering contraceptives include skin patches, monthly injections, and vaginal rings. It is not clear, however, if they have any advantages for women with heavy bleeding.

Choosing Between Surgery and Medical Treatments

Women with DUB now have surgical and medical options available to them.

Choosing Between Endometrial Resection or Ablation

In either standard endometrial resection or ablation, the entire lining of the uterus (the endometrium) is removed or destroyed.

The standard endometrial ablation and resection techniques are equally effective in reducing bleeding. In general, either one reduces bleeding by about half. At least 90% of women find either procedure acceptable and about three-quarters are totally or generally satisfied with the treatment. Only about 15% of women require a hysterectomy later on. Since no procedure has any particular advantage, a woman’s best option may be to select the procedure based on their surgeon’s skill and experience with it.

Newer second-generation endometrial ablation approaches that compare favorably to the standard techniques and are less invasive are being used or investigated.

The hormonal agents GnRH analogs used before the procedures help to prepare the uterus by thinning the lining. Evidence now strongly supports their use for improving operating conditions and at least short-term outcome.

Complications from either procedure may include perforation of the uterus, injury to the intestine, hemorrhage, or infection.

In standard resection and ablation, the uterine cavity is expanded by filling it with fluid. In rare instances, excess glycine from the fluid instilled in the uterus builds up in the bloodstream and causes an abnormal drop in sodium levels. This can be a serious event resulting in mental confusion, convulsions, and very rarely, death. General anesthesia may pose a lower risk for this complication than local. Some of the newer ablation procedures do not require fluid instillation.

Resection procedures benefit those women who have very heavy menstrual bleeding but do not have any other underlying uterine problems, such as polyps, hyperplasia of the endometrium, or cancer.

Resection also seems to have a higher success rate in reducing bleeding and relieving pain in older women than younger women.

Endometrial ablation involves the destruction of the uterine lining using a number of approaches that include heat, electricity, laser energy, and other methods.

The standard ablation approach uses hysteroscopy to allow the physician to view the uterus. 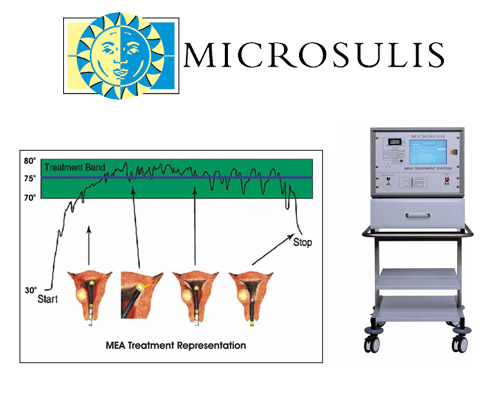 Balloon ablation is carried out as follows