n estimated 10% of all women in their reproductive years have chronic gynecologic problems.

Nearly 30% of women reporting such problems spend one or more days in bed per year because of them.

It is often very difficult to diagnose true menorrhagia.

For one, it is very difficult to measure blood loss during menstruation, and the perceptions of women as well as their physicians vary widely.Some women may overestimate their menstrual flow. Some women underestimate it. For example, women with a family history of bleeding disorders might have menorrhagia but think it is normal because it is the same as their mother’s or sister’s.

Physicians may underestimate their patient’s flow.

A physician will perform a pelvic examination to check for pregnancy-related conditions and for signs of fibroids or other abnormalities, such as ovarian cysts.

The physician needs to have a complete history of any medical or personal conditions that might be causing heavy bleeding.

He or she may need the following information:

Hysteroscopy is a procedure that may be used to detect the presence of fibroids, polyps, or other causes of bleeding.

It is done in the office setting and requires no incisions.

The procedure uses a long flexible or rigid tube called a hysteroscope, which is inserted into the vagina and through the cervix to reach the uterus. A fiber optic light source and a tiny camera in the tube allow the physician to view the cavity. The uterus is filled with saline This may causecramping. 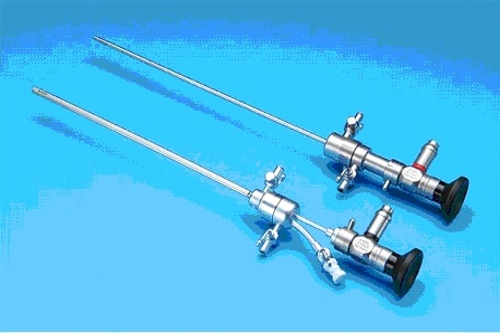 Hysteroscopy is also employed as part of surgical procedures.

Magnetic resonance imaging (MRI) gives a better image of any fibroids that might be causing bleeding, but it is expensive and not usually necessary.

Endometrial Biopsy With or Without Dilation and Curettage (D&C)

When heavy or abnormal bleeding occurs, an endometrial (uterine) biopsy can be performed in the office along with an ultrasound.

It is usually used with a procedure called dilation and curettage (D&C), which is particularly important to rule out uterine (endometrial) cancer.

A D&C is a somewhat invasive procedure:

The procedure is used to take samples of the tissue and to relieve heavy bleeding in some instances. D&C can also be effective in scraping off small endometrial polyps, but it is not very useful for most fibroids, which tend to be larger and more firmly attached.